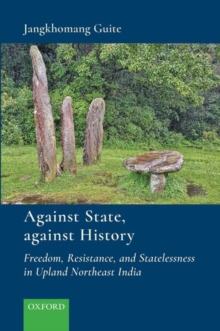 Against State, Against History : Freedom, Resistance, and Statelessness in Upland Northeast India Hardback

Living in the shadow of state is not a dark, static and silent world.

It was the world in full radiance, involving multiple process of reenactment to life, lifeways and relationship.

If state and history demonized the hill people as the 'pest' and 'nuisance' to civilization, and the hill practices as the 'relics' of the 'primitive', the hillmen's narratives celebrated them as their core cultural collective.

Against State, Against History is a radicalreevaluation of the dominant civilizational narratives on the 'tribe' and attempts to recast their history in the light of recent historiography that presents the hillmen as state evading population.

Bringing together both conventional and oral narratives, and from the counter-perspectives of the margin, the book explores the conditions in which section of valley population escaped to the hills, their migration history, how they reenact their space, society, culture and economy in the hills.

Their physical dispersion in the highland terrain, choosing an independent village polity, defended by trained warriors, fortressed at the top of hills, connected by repulsive pathways, followingjhum economy, and adopting a pliable social, cultural, ethnic and gender formations, are their counter cultural collective at the margins of state.

They were reenacted to prevent state control and the emergence of domination relations in the hills.

This process is understood as unstate involving theprocess of disowning state and becoming an egalitarian society where freedom of individuals was located at the core of their cultural collective.