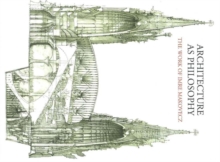 At the start of this book Imre Makovecz gently criticises the commentators who first brought his work to the West.

He is grateful to them of course, but he claims they only half understood, simplifying and misinterpreting.

They presented him as a heroic rebel against the communist system, rather than seeing his battle against a larger enemy that we all still face: this he calls impersonal intelligence.

When he remarks that architecture is not regarded as an art in Hungary, but as a service, and that it has no place in the Ministry of Culture, we find it all too familiar.

It is perhaps understandable that someone so concerned with cultural memory -- especially long-repressed folk memories -- should arise in much-oppressed Hungary, which was fought over for millennia even before the advent of the Soviet Empire, but the same cultural amnesia is occurring throughout the world, exhibited in increasing rootlessness and placelessness.

Perhaps the most misleading reading of all has been Makovecz the wild man or primitive, but this book shows him to be a highly articulate architectural philosopher and intellectual, conversant from the start with a wide range of international sources. There is much more to the work than the expressive image we first encounter.

It warmly embraces place and community, and quite aside from its ecological dimension, there is a concern with the building process and the participation of craftsmen that would have warmed William Morris heart.

Most bold and most intriguing is Makoveczs claim to be tapping into ancient and universal folk memories that are lodged in hand-made patterns, gestures and even dance.

Over the last century we have had to revise our sense of civilisation, for cities and writing are but five thousand years old, yet our forebears tens of thousand years ago could scarcely have been less intelligent and communicative than ourselves.