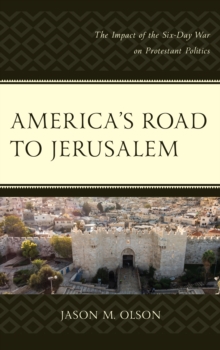 America's Road to Jerusalem : The Impact of the Six-Day War on Protestant Politics Hardback

This study examines the role of the Six-Day War in American Protestant politics and culture.

The author argues that American foreign policy towards the Arab-Israeli conflict, culminating in the Trump Administration's 2017 recognition of Jerusalem as Israel's capital, and the domestic Evangelical communities who supported it, has a direct correlation with the long-term consequences of the 1967 Six-Day War. For most of America's history, biblical literalists, or Evangelicals, dominated the religious culture of the country.

But, in 1925, the Scopes trial on science, evolution, and religion embarrassed Evangelicals and caused them to retreat from American culture and politics.

Modern and liberal Protestants won dominance and established control in nearly all of the Mainline seminaries, publishing houses, and denominations, leading to the creation of the National Council of Churches by 1950. This book argues that the Six-Day War reversed that power structure in American religion, with Evangelicals returning to a place of prominence in American culture and politics.

Whereas the Scopes trial showed much of American Protestantism that the Modernists had the right understanding of the Bible; the Six-Day War demonstrated that, ironically, Evangelicals may have had it right all along.

They used this historic leverage to vaunt themselves into the highest planes of American life, with Billy Graham becoming "America's Pastor."In this historic process, the 1967 war between Israel and the surrounding Arab states clarified the way those different branches of American Protestantism thought about the Arab-Israeli conflict, particularly the issue of Jerusalem.

Indeed, the nature of the Six-Day War was deep and appeared to be of Biblical proportions. Because Israel gained territories in Jerusalem, Bethlehem, and the ancient Biblical heartlands formerly held by Jordan; historical, messianic, and even apocalyptic intrusions entered the various branches of American Protestantism.

In some branches, supersessionism, a belief that the Church had replaced the Jewish people as God's chosen, was stoked.

In other branches, supersessionism was rejected and the nature of Judaism and its connection to the Holy Land was re-evaluated.

The important point is that the territories that Israel captured had thick theological meaning, and this would force all branches of American Protestantism to reconsider their assumptions about Judaism and Zionism, as well as Islam and Palestinian nationalism. Evangelicalism. 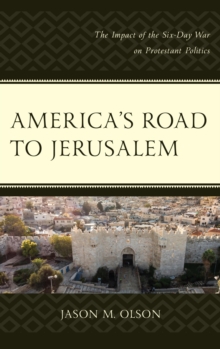