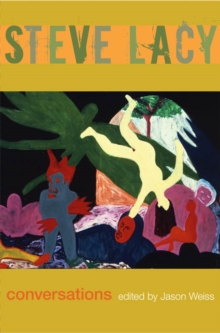 Steve Lacy: Conversations is a collection of thirty-four interviews with the innovative saxophonist and jazz composer.

Lacy (1934-2004), a pioneer in making the soprano saxophone a contemporary jazz instrument, was a prolific performer and composer, with hundreds of recordings to his name.

This volume brings together interviews that appeared in a variety of magazines between 1959 and 2004.

Conducted by writers, critics, musicians, visual artists, a philosopher, and an architect, the interviews indicate the evolution of Lacy's extraordinary career and thought.

Lacy began playing the soprano saxophone at sixteen, and was soon performing with Dixieland musicians much older than he.

By nineteen he was playing with the pianist Cecil Taylor, who ignited his interest in the avant-garde.

He eventually became the foremost proponent of Thelonious Monk's music.

Lacy played with a broad range of musicians, including Monk and Gil Evans, and led his own bands.

A voracious reader and the recipient of a MacArthur "genius" grant, Lacy was particularly known for setting to music literary texts-such as the Tao Te Ching, and the work of poets including Samuel Beckett, Robert Creeley, and Taslima Nasrin-as well as for collaborating with painters and dancers in multimedia projects. Lacy lived in Paris from 1970 until 2002, and his music and ideas reflect a decades-long cross-pollination of cultures.

Half of the interviews in this collection originally appeared in French sources and were translated specifically for this book.

Jason Weiss provides a general introduction, as well as short introductions to each of the interviews and to the selection of Lacy's own brief writings that appears at the end of the book.