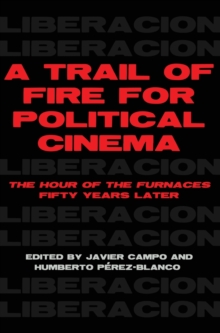 A Trail of Fire for Political Cinema : The Hour of the Furnaces Fifty Years Later Hardback

Marking the 50th anniversary of the premiere of La Hora de Los Hornos (The Hour of the Furnaces) (Getino and Solanas, 1968), A Trail of Fire for Political Cinema is an edited collection that closely analyses the film, looking to the context and the socio-political landscape of 1960s Argentina, as well as the film's legacy and contemporary relevance.

Attention is paid to the corpus of political documentaries made between 1968 to 1976, including those that marked the last coup d' tat in Argentina, to emphasize how formal and thematic trends relate to their Argentinian social context.

In order to highlight The Hour of the Furnaces's contemporary relevance as a form of politically engaged activism, the book will also look at Fernando Solanas's documentary output in the twenty-first century.