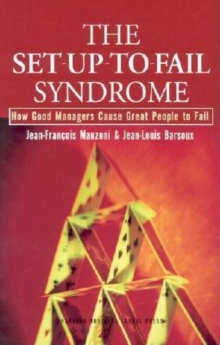 The Set-Up-To-Fail Syndrome : How Good Managers Cause Great People to Fail Hardback

Does this scenario sound familiar? An employee you manage slips up somehow: a missed deadline, a lost account, or a weak presentation.

You decide to oversee that person's work more closely.

After all, if your direct reports aren't delivering, it's your head that will roll.

To further your frustration, the more you 'help', the worse the employee's performance becomes.

While common wisdom assumes that so-called poor performers fail in spite of their boss' best efforts, this book demonstrates exactly the opposite.

In many cases, a boss' attitudes and behaviors actually cause or 'set up' certain individuals - including those with great potential - to fail.

Based on ten years of study into boss-subordinate relationships, Manzoni and Barsoux show that this Set-Up-to-Fail Syndrome is not confined to relationships with the proverbial 'boss from hell'.

Even respected leaders - whether CEOs, teachers, or coaches - get caught up in it. The problem stems from the fact that while most managers empower and encourage star performers, they tend to micromanage and control perceived 'weaker' performers in ways that stifle self-confidence and drive.

The unwitting result: the latter group lives down to expectations, rather than living up to its true potential.

The cost of the Syndrome, say Manzoni and Barsoux, goes well beyond the lost productivity of a few individuals.

Through dozens of interviews, illustrative stories, and compelling research, they show how readers can: determine whether they are involved in a set-up-to-fail dynamic, Recognize the mental biases that cause bosses to trigger the cycle; understand how subordinates contribute to fueling the problem; take specific steps to interrupt the cycle through proactive interventions; and, prevent the Syndrome altogether by managing relationships differently.

For anyone with influence on an individual's potential, this book offers powerful ways to improve performance - and quality of life - in any organizational setting. Jean-Francois Manzoni is Associate Professor of Management and founding director of the research initiative on High Performance Organizations at INSEAD in Fontainebleau, France.

Jean-Louis Barsoux is a Senior Research Fellow at INSEAD.

Also by Jean-Francois Manzoni   |  View all 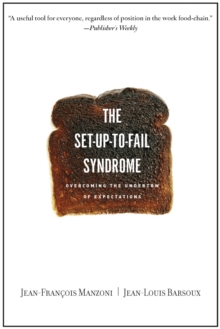 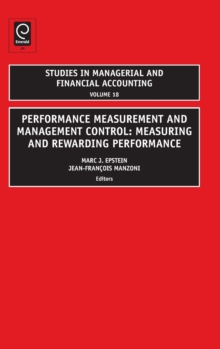 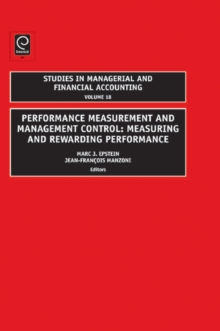 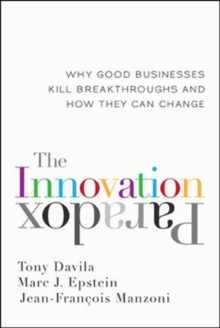 The Innovation Paradox: Why Good...