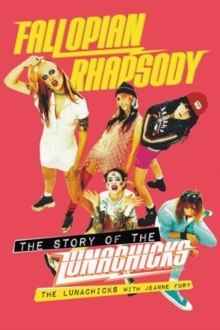 Fallopian Rhapsody : The Story of the Lunachicks Paperback / softback

by Jeanne Fury, The Lunachicks

In the late 80s, three self-described "total freak" high school girls from Brooklyn found salvation in the sisterhood of friendship, refuge in the East Village.

Soon after graduation, The Lunachicks signed with Blast First Records; Kim Gordon and Thurston Moore whisked them into the studio (it did not go well). And yet the Lunachicks fought for their space in the virtually boys-only world of punk and rock throughout the 90s.

Their unforgettable costume-critiques of pop culture were as loud as their "Marsha[ll]" amps, the ferocity of their feminism as lasting as their pre-internet mythology. They toured with bands like Marilyn Manson, No Doubt, Rancid, and The Offspring.

The played the Reading Festival with Nirvana and did the testosterone-fueled Warped tour (twice).

Lauded by critics and feared by men, The Lunachicks annihilated social conventions from Brooklyn to Tokyo and somehow managed to survive, but not unscathed.

Fallopian Rhapsody chronicles becoming an established band and hearing industry dudes say, "We're not booking you because we already had a girl band play here this month," or "We're not playing your song on our radio show because we already have No Doubt in the rotation." Their group memoir will also recount their collapse, drug abuse and intervention, survival and reinvention.

Filled with never-before-seen photos, illustrations, and ephemera from the band's private archive, this book will be a must-have for new and old fans alike. For readers of Carrie Brownstein's Hunger Makes me a Modern Girl, Kim Gordon's Girl in a Band, and Chrissie Hynde's Reckless, Fallopian Rhapsody is the literary equivalent of diving headfirst into a moshpit and, slowly but surely, venturing up to the front of the stage.