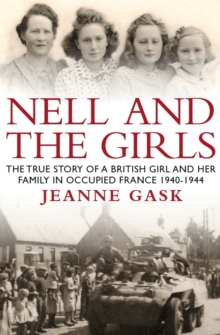 Nell and the Girls Paperback / softback

'Goodbye! There's my good girl.' The German got hold of Papa's arm roughly and said, 'Come on!' They got in the car and sped away, leaving the two breathless girls standing on the street corner, staring at where the car had been. 'What on earth was all that about? Why has my Daddy gone with that German?' It made no sense.

It made no sense at all. France, 1940: The British have retreated, evacuating their forces from Dunkirk.

Nell and her girls stand on the beach on a clear day and see the outline of Dover Castle but it will be four and a half long years before they return to Britain.

Jeanne, her sisters and their mother Nell are left to fend for themselves in occupied France when her father is arrested by the Nazis and taken to an internment camp.Proudly British, they have also been raised speaking French.

Nell is determined to keep going, keep food on the table and see her girls continue in education.

She takes in washing, teaches English and tries growing vegetables but the soil is too poor.

They apply for Red Cross Parcels but are told, as they are not behind barbed wire, they don't qualify.Yet amid the struggles come great friendships and pleasure in the smallest things; the rare treat of a piece of cake or tart, a Christmas tree decorated with cotton or singing in church. Jeanne's sisters are distinct personalities, one bookish and quiet, the other outgoing.

Letters from her interned husband Tom Sarginson and occasional visits to see him only temporarily eases the pain of being parted.

Nell falls in love with a kindly German soldier. When liberation comes in 1944 Nell and the girls' excitement is tempered by a shocking event in their then home village of Rieux-en-Cambresis.

There follows an exhilarating and frustrating stay in newly liberated Paris and the shock of arriving back in the war weary Britain of late 1944.

Nell and the Girls is a remarkable, dramatic and heartwarming true story of a family told from the viewpoint of young Jeanne Sarginson, later Gask.