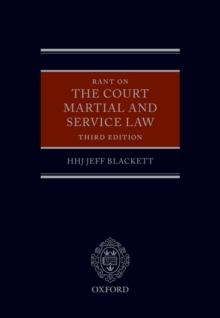 Rant on the Court Martial and Service Law Hardback

This new edition of Rant on the Court Martial, Discipline, and the Criminal Process in the Armed Services follows the Armed Forces Act 2006, which overhauls the naval and military justice systems, establishing a single system of service law and removing the need for separate consideration of the law applicable to the three services.

The Act establishes the Court Martial as a standing court, and will establish a single prosecuting authority.

It also abolishesreview, removes old offences, establishes new offences and introduces a new sentencing regime reflecting the changes in the civil system brought about by the Criminal Justice Act 2003.

It also extends the jurisdiction of Court Martial to allow it to try certain serious offences committed in the UK (treason,murder, manslaughter and rape), brings the new sentencing provisions introduced into civilian practice by the Criminal Justice Act 2003 into the Service jurisidiction as well as making changes to the Service Civilian Court following the extension of jurisdiction over wider sections of civilians. This new edition has been fully revised to provide detailed coverage of the Act, which is due to come into force in October 2009.

It includes a new chapter reviewing and assessing the impact of key cases in the European Court of Human Rights; new material highlighting the parallels and differences between procedure in the Crown Court and Court Martial; and a more in-depth treatment of sentencing matters.

The appendices will include the various Rules relating to Service courts, relevant extractsfrom the Act and a list of all 65 Statutory Instruments.

This is an essential handbook for those practising in the Service justice system and for academics researching Service law.