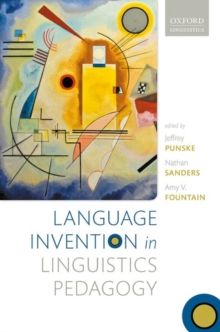 This book is the first to explore the varied ways in which invented languages can be used to teach languages and linguistics in university courses.

There has long been interest in invented languages, also known as constructed languages or conlangs, both in the political arena (as with Esperanto) and in the world of literature and science fiction and fantasy media - Tolkien's Quenya and Sindarin, Dothraki in Game of Thrones, and Klingon in the StarTrek franchise, among many others.

Linguists have recently served as language creators or consultants for film and television, with notable examples including Jessica Coons work on the film Arrival Christine Schreyers Kryptonian for Man of Steel, David Adgers contributions to the series Beowulf, and David J. Peterson's numerous languages for Game of Thrones and other franchises. The chapters in this volume show how the use of invented languages as a teaching tool can reach a student population who might not otherwise be interested in studying linguistics, as well as helping those students to develop the fundamental core skills of linguistic analysis.

Invented languages encourage problem-based and active learning; they shed light on the nature of linguistic diversity and implicational universals; and they provide insights into the complex interplay of linguisticpatterns and social, environmental, and historical processes.

The volume brings together renowned scholars and junior researchers who have used language invention and constructed languages to achieve a range of pedagogical objectives.

It will be of interest to graduate students and teachers of linguisticsand those in related areas such as anthropology and psychology.