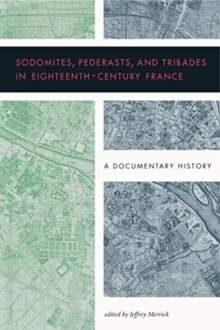 In this book, Jeffrey Merrick brings together a rich array of primary-source documents-many of which are published or translated here for the first time-that depict in detail the policing of same-sex populations in eighteenth-century France and the ways in which Parisians regarded what they called sodomy or pederasty and tribadism.

Taken together, these documents suggest that male and female same-sex relations played a more visible public role in Enlightenment-era society than was previously believed. The translated and annotated sources included here show how robust the same-sex subculture was in eighteenth-century Paris, as well as how widespread the policing of sodomy was at the time.

Part 1 includes archival police records from the 1720s to the 1780s that show how the police attempted to manage sodomitical activity through surveillance and repression; part 2 includes excerpts from treatises and encyclopedias, published nouvelles (collections of news) and libelles (libelous writings), fictive portrayals, and Enlightenment treatments of the topic that include calls for legal reform.

Together these sources show how contemporaries understood same-sex relations in multiple contexts and cultures, including their own.

The resulting volume is an unprecedented look at the role of same-sex relations in the culture and society of the era. The product of years of archival research curated, translated, and annotated by a premier expert in the field, Sodomites, Pederasts, and Tribades in Eighteenth-Century France provides a foundational primary text for the study and teaching of the history of sexuality.