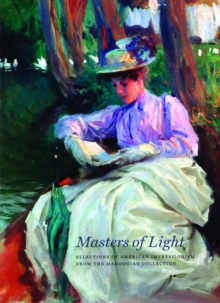 Masters of Light : Selections of American Impressionism from the Manoogian Collection Paperback / softback

Americans were introduced to Impressionism by the French in the 1880s.

They explored its expressive potential and debated its merits in the 1890s, and by the turn of the 20th century, American painters had seized the style for their own.

Included here are thirty superb examples of American Impressionist painting by the seminal artists who redefined the movement for American audiences, including Frank W.

Benson, Mary Cassatt, William Merritt Chase, Childe Hassam, John Singer Sargent, John Henry Twachtman, and others. Featuring contributions by some of the clearest voices and leading authorities on American Impressionism, Masters of Light brings into the spotlight brilliant and rarely seen paintings while illuminating their place in the larger currents of American art history.

An essay by Kevin Sharp, "The Americanization of Impressionism," examines the unintentional circumstances and deliberate efforts that transformed Impressionism from an expression of the French vanguard into an international style, and eventually, into a peculiarly American enterprise.

Long recognized as the premier private holding of nineteenth- and early twentieth-century American paintings in the world, the Manoogian Collection runs especially broad and deep in the area of American Impressionism, and includes many of the essential works produced by the painters who would become the "Masters of Light."