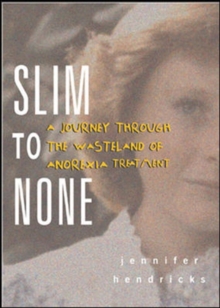 Slim to None Paperback / softback

"An important book...Jenny Hendricks' diary entries speak to us directly without manipulation, but with the plain truth of who she is, and what she perceives about others...A valuable head-start to understanding one anorexic's personality." - Steven Levenkron, psychotherapist and author of "The Best Little Girl in the World". "[Jennifer Hendricks]...fought to be cured of anorexia nervosa.

But as the diary she kept shows, a widespread lack of understanding about eating disorders and scattergun treatment programs make the battle almost insurmountable...a sorrow to read." - "New York Times". "Patients' voices can all too easily be forgotten in the world of mental health care, but Jenny's voice rings strong.

Through this earnest and captivating exposure, her father succeeds in keeping her story alive." - David B.

Herzog, M.D., president and founder of the Harvard Eating Disorders Center.This eloquently written, heart-wrenching book shares a brave but tormented young woman's candid chronicle of her long and ultimately fatal battle with the eating disorder anorexia. In "Slim to None", the late Jenny Hendricks speaks to you from her own carefully detailed personal journals - a practice suggested as treatment by one of her many doctors.

Gently edited and narrated by her father, this book vividly illustrates Jenny's intense emotional struggles - her pride at improving her health clashing with her undefined guilt over eating, her internal conflict between will and reason, and the dispiriting war between self-confidence and self-doubt that plagued her.Most of all, here is an amazing account of the efforts to understand the root of an illness that continues to confound the mental-health system, even at the dawn of the twenty-first century.

Jennifer Hendricks was the valedictorian of her high school class but spent most of her last five years confined in hospitals.

She weighed just 45 pounds when she died at age 25. 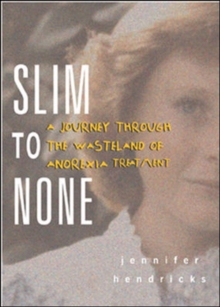