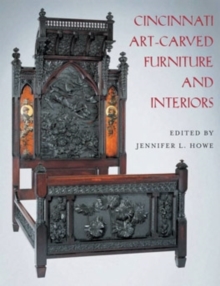 In the early 1850s three British expatriates-Henry Lindley Fry, his son William Henry Fry, and Benn Pitman-settled in Cincinnati and launched one of the most important manifestations of Aesthetic movement furniture in the United States, the Cincinnati art-carved furniture movement.

By the early 1870s the Frys began offering private instruction in woodcarving, and Pitman initiated classes at the School of Design (later the Art Academy of Cincinnati). The majority of the woodcarving students were affluent women seeking suitable artistic pastimes, although some students enrolled to learn a marketable skill.

The Frys and Pitman and their female students gained national acclaim and recognition for their woodcarving through their display at the Philadelphia Centennial Exhibition of 1876.

National art journals featured Cincinnati woodcarving throughout the late 1870s and the 1880s and published articles by Pitman, a prolific writer and philosopher of the movement.

Cincinnati Art-Carved Furniture and Interiors is the first book devoted to the study of this nationally significant artistic movement.

Edited by Jennifer L. Howe, with contributions by noted scholars, Cincinnati Art-Carved Furniture and Interiors situates the movement within the context of the city's rich cultural heritage, documents the careers of the Frys and Pitman in England and America, explores their domestic and ecclesiastical interior commissions, and examines the central role women played in this movement. The book includes a catalog of the Cincinnati Art Museum's impressive holdings of Cincinnati art-carved furniture.

An appendix presents biographical information on more than one thousand of the Frys' and Pitman's woodcarving students, and numerous color plates and period photographs.