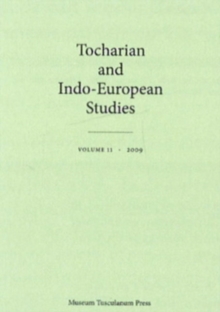 Established in 1987, Tocharian and Indo-European Studies (TIES) is an international scholarly journal with contributions in English, German and French. The journals central topic is formed by the two closely related languages Tocharian A and B, attested in Central Asian Buddhist manuscripts dating from the second half of the first millennium AD.

It focuses on philological and linguistic aspects of Tocharian, and its relation with the other Indo-European languages.