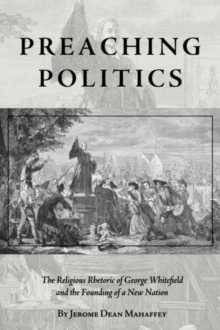 Preaching Politics : The Religious Rhetoric of George Whitefield and the Founding of a New Nation Hardback

The third volume in Studies in Rhetoric & Religion, Preaching Politics traces the surprising and lasting influence of one of American history's most fascinating and enigmatic figuresaGeorge Whitefield.

Jerome Mahaffey explores George Whitefield's role in creating a "rhetoric of community" that successfully established a common worldview among the many colonial cultures.

Using a rigorous method of rhetorical analysis, Mahaffey cogently argues that George Whitefield directed the evolution of an American collective religious identity that lay underneath the emerging political ideology that fueled the American Revolution.