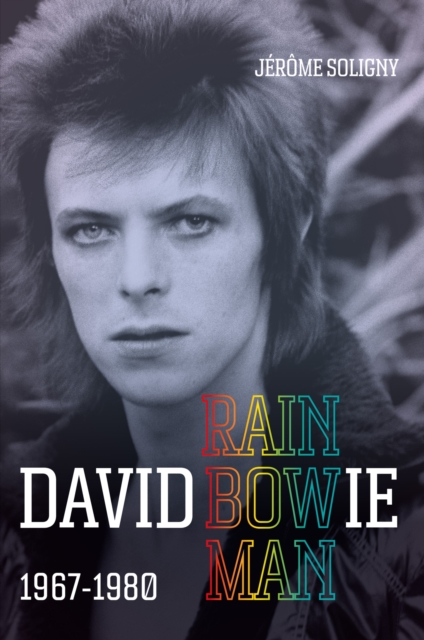 'This is a book unlike any other, the definitive analysis of David's music, told in a quiet natural way, but with absolute authenticity, by the people around him.' - Hermione Farthingale'Jerome Soligny is one of the best authorities in the world of David Bowie's career and life in general...

His new biography Rainbowman is a thorough and honest account of the great man.' - Tony Visconti'Jerome is a guy who is still aware that popular music is an art form and not a money suppository.

He writes from the heart and is one of the last exemplars of a dying breed.

The critic, armed with intelligence and brute compulsive honesty, as dangerous as a river.' - Iggy Pop'Not long ago, Jerome told me something that I find very true: "David played saxophone, guitar, a bit of keyboards, but above all, he played... musicians!" I think he was right on the money.' - Mike GarsonIn David Bowie Rainbowman, Jerome Soligny tells the story of David Bowie the musician with the help of those intimately involved with the creation of his music. This uniquely exhaustive work on Bowie's 1967-1980 albums draws on over 150 interviews with the musicians, producers and friends who knew Bowie best, including Robert Fripp, Hermione Farthingale, Lou Reed, George Underwood, Mick Ronson, Carlos Alomar, Trevor Bolder, Mike Garson, Woody Woodmansey and many, many others.

With an essay by Soligny on each album followed by oral histories from the most trusted and influential figures in Bowie's musical life, David Bowie Rainbowman is the definitive guide to a singular and mercurial genius - the Rainbowman himself. * With a foreword by Tony Visconti, an introduction by Mike Garson and cover photo by Mick Rock* A beautiful and stylish gift for Bowie fans, over 700 pages long, filled with iconic photographs and with striking cover design by Barnbrook