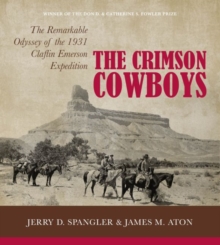 The Crimson Cowboys : The Remarkable Odyssey of the 1931 Claflin-Emerson Expedition Paperback / softback

The first full account of the journey and discoveries of an archaeological expedition into the rugged American Southwest. In 1931 a group from Harvard University's Peabody Museum accomplished something that had never been attempted in the history of American archaeology-a six-week, four-hundred-mile horseback survey of prehistoric sites through some of the West's most rugged terrain.

The expedition was successful, but a report on the findings was never completed.

What should have been one of the great archaeological stories in American history was relegated to boxes and files in the basement of the Peabody Museum at Harvard.

Now, based on over a thousand pages of documents and over four hundred photographs, this book recounts the remarkable day-to-day adventures of this crew of one professor, five students, and three Utah guides who braved heat, fatigue, and the dangerous canyon wilderness to reveal vestiges of the Fremont culture in the Tavaputs Plateau and Uinta Basin areas.

To better tell this story, authors Spangler and Aton undertook extensive fieldwork to confirm the sites; their recent photographs and those of the original expedition are shared on these pages.