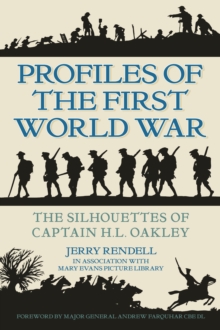 H.L. Oakley was one of the most talented and prolific silhouette artists of the twentieth century.

Despite his fame, he was determined to enlist and play his part in fighting for his country in the First World War.

He joined up in the summer of 1914, but continued to create arresting images, including one of the most famous recruiting posters of the day, that was used not only across Britain, but in Australia, South Africa and Canada.

He served with the Green Howards and continued throughout his military career to create silhouettes of the front, from famous officers to the men in the trenches, capturing the imagination of those back home and his illustrations became a regular feature alongside the famous cartoonists of the day in `The Bystander' magazine.

These quirky, charming and powerful silhouettes show life on the frontline during the Great War in a whole new light.