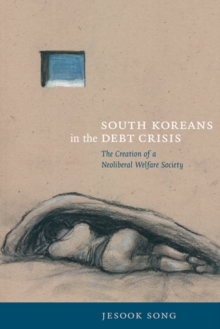 South Koreans in the Debt Crisis : The Creation of a Neoliberal Welfare Society Hardback

South Koreans in the Debt Crisis is a detailed examination of the logic underlying the neoliberal welfare state that South Korea created in response to the devastating Asian Debt Crisis (1997-2001).

Jesook Song argues that while the government proclaimed that it would guarantee all South Koreans a minimum standard of living, it prioritized assisting those citizens perceived as embodying the neoliberal ideals of employability, flexibility, and self-sufficiency.

Song demonstrates that the government was not alone in drawing distinctions between the "deserving" and the "undeserving" poor.

She analyzes the embrace of partnerships between NGOs and the government, the frequent invocation of a pervasive decline in family values, the resurrection of conservative gender norms and practices, and the promotion of entrepreneurship as the key to survival.

Drawing on her experience during the crisis as an employee in a public works program in Seoul, Song provides an ethnographic assessment of the efforts of the state and civilians to regulate social insecurity, instability, and inequality through assistance programs.

She focuses specifically on efforts to help two populations deemed worthy of state subsidies: the "IMF homeless," people temporarily homeless but considered employable, and the "new intellectuals," young adults who had become professionally redundant during the crisis but had the high-tech skills necessary to lead a transformed post-crisis South Korea. 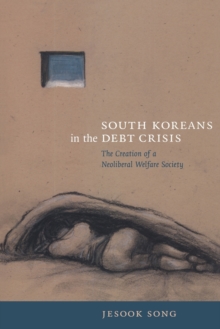 South Koreans in the Debt Crisis