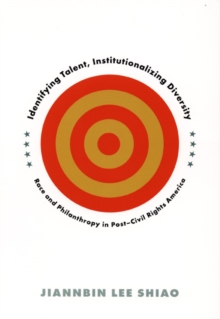 "Diversity" has become a mantra in corporate boardrooms, higher education, and government hiring and contracting.

In Identifying Talent, Institutionalizing Diversity, Jiannbin Lee Shiao explains the leading role that large philanthropies have played in establishing diversity as a goal throughout American society in the post-civil rights era.

By creating and institutionalizing diversity policies, these private organizations have quietly transformed the practice of affirmative action.

Shiao describes how, from the 1960s through the 1990s, philanthropies responded to immigration, the recognition of nonblack minority groups, and the conservative backlash against affirmative action.

He shows that these pressures not only shifted discourse and practice within philanthropy away from a binary black-white conception of race but also dovetailed with a change in its mission from supporting "good causes" to "identifying talent."Based on three years of research on the racial and ethnic priorities of the San Francisco Foundation and the Cleveland Foundation, Shiao demonstrates the geographically uneven impact of the national transition to diversification.

The demographics of the regions served by the foundations in San Francisco and Cleveland are quite different, and paradoxically, the foundation in Cleveland-which serves an area with substantially fewer immigrants-has had greater institutional opportunities for implementing diversity policies.

Shiao connects these regional histories with the national philanthropic field by underscoring the prominent role of the Ford Foundation, the third largest private foundation in the country, in shaping diversity policies.

Identifying Talent, Institutionalizing Diversity reveals philanthropic diversity policy as a lens through which to focus on U.S. race relations and the role of the private sector in racial politics. 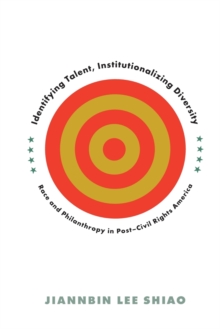