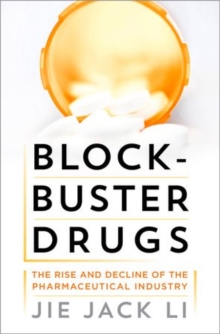 Blockbuster Drugs : The Rise and Fall of the Pharmaceutical Industry Hardback

Blockbuster drugs-each of which generates more than a billion dollars a year in revenue-have revolutionized the industry since the early 1980s, when sales of Tagamet alone transformed a minor Philadelphia-based firm into the world's ninth-largest pharmaceutical company.

In Blockbuster Drugs, Jie Jack Li tells the fascinating stories behind the discovery and development of these highly lucrative medicines, while also exploring the tumult the industry nowfaces as the "patent cliff" nears.

Having spent most of his career in drug research and development, Li brings an insider's eye to the narrative as he recounts the tales of discovery behind such drugs as Tagamet, Zantac, Claritin, Prilosec, Nexium, Serouquel, Plavix, and Ambien.

For instance, the author tells of James Black, who persisted in the research that ledto Tagamet-and that would ultimately win him a Nobel Prize-despite pressure from top executives to pursue "more profitable" work.

The book shows how research behind Prilosec combined creativity, international cooperation, and luck-the turning point being a chance encounter of American and Swedishscientists at a conference in Uppsala.

There are also tales of fabulous rewards-George Rieveschl, the chemist who invented Benadryl, made a fortune on royalties-and of unjust desserts.

Finally, Li shows that for the world's largest prescription drug manufacturers, recent years have been harrowing, as many popular drugs have come off patent in the U.S. market, meaning hundreds of billions of dollars in lost revenue.

Anyone who enjoys tales of scientific discovery, or is curious about the history behind the prescriptions they take, or wants a revealing inside look at the pharmaceutical industry will find this book well worth reading.