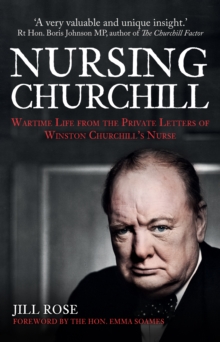 A fresh perspective on Churchill and wartime life through the eyes of the nurse charged with looking after the Prime Minister. In February 1943, when the course of the Second World War hung in the balance, 68-year-old Prime Minister Winston Churchill was stricken with pneumonia.

Doris Miles, from St Mary's Hospital in London, was appointed as his private nurse.

During her time with Churchill, she wrote regularly to her husband, a Surgeon-Lieutenant with the Royal Navy, about life at the centre of Britain's war effort, and about Churchill himself.

With unrivalled intimacy, her observations show a very human and seldom-seen side of the great man and include many amusing anecdotes.

She describes with wry humour their arguments and conversations, and life at Downing Street and Chequers. She writes as well of the everyday events that carried on despite the war; weddings and parties, family and friends, births and deaths, and working life at one of London's busiest hospitals.

She describes her feelings, her fears and her hopes for the future.

This is a poignant and perceptive collection of previously unpublished letters that shows an ordinary person's perspective of Churchill through a crucial period of the war, as well as how the war affected those at home, unfiltered by the lens of history.

It is also a love story, from a newly-wed young woman whose husband went to war.

This exclusive wartime source is adroitly woven into the wider context of those turbulent times.