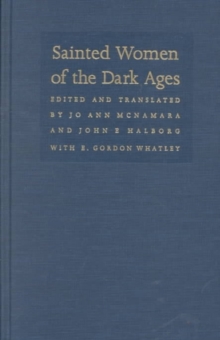 Sainted Women of the Dark Ages makes available the lives of eighteen Frankish women of the sixth and seventh centuries, all of whom became saints.

Written in Latin by contemporaries or near contemporaries, and most translated here for the first time, these biographies cover the period from the fall of the Roman Empire and the conversion of the invading Franks to the rise of Charlemagne's family. Three of these holy women were queens who turned to religion only after a period of intense worldly activity.

Others were members of the Carolingian family, deeply implicated in the political ambitions of their male relatives.

Some were partners in the great Irish missions to the pagan countryside and others worked for the physical salvation of the poor.

From the peril and suffering of their lives they shaped themselves as paragons of power and achievement.

Beloved by their sisters and communities for their spiritual gifts, they ultimately brought forth a new model of sanctity. These biographies are unusually authentic. At least two were written by women who knew their subjects, while others reflect the direct testimony of sisters within the cloister walls.

Each biography is accompanied by an introduction and notes that clarify its historical context.

This volume will be an excellent source for students and scholars of women's studies and early medieval social, religious, and political history.