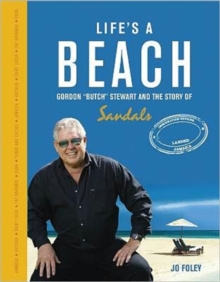 Life's A Beach : Gordon 'Butch' Stewart and the Story of Sandals Hardback

The Hon Gordon 'Butch' Stewart was born in Jamaica, the island where he introduced an unsuspecting world to the possibilities that a luxury all-inclusive resort could contain - a place where life was not just one long beach, but also one long party. Stewart's name is synonymous with Sandals Resorts but he has also, for the last 40 years, run one of the most successful companies in the Caribbean, ATL.

He is Jamaica's largest private employer and in his time has helped save not only the national airline but also the Jamaican dollar.

Now celebrating his 70th year, along with 30 years of the world's favorite luxury-included resorts, the Stewart magic is as strong as ever.

As an innovator he has few rivals, and as a marketeer hardly any.

Through good times and bad, Stewart has forged a company that is one of the most recognizable in the world.