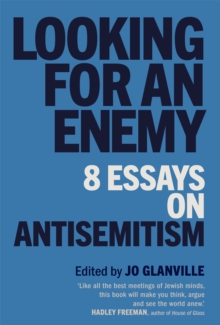 Looking for an Enemy : 8 Essays on Antisemitism Hardback

"Like all the best meetings of Jewish minds, this book will make you think, argue and see the world anew." Hadley Freeman, author of House of GlassConspiracy theories about Jews are back in the mainstream.

The Pittsburgh gunman who murdered 11 people in a synagogue claimed that 'filthy evil' Jews were bringing 'filthy evil' Muslims into America.

The billionaire philanthropist George Soros has been accused of supporting 'white genocide'.

Labour Party members have claimed that Israel is behind ISIS.

The belief that Jews are plotting against society never dies, it just adapts to suit the times: from medieval accusations that Jews murder Christians for their blood to claims that Zionists are seeking to control the world.

In eight short essays, edited by Jo Glanville, this book goes back to the source of the conspiracy theories and traces their journey into the 21st century in a bid to make sense of their survival.

With contributions from some of the great Jewish writers and thinkers of our time, including Tom Segev, Jill Jacobs and Mikhail Grynberg, this is a fresh take on the roots of antisemitism that explores how an irrational belief can still flourish in a supposedly rational age.