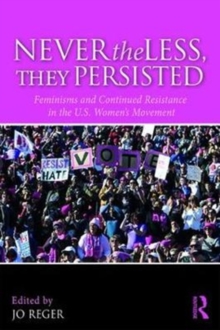 2017 opened with a new presidency in the United States sparking women's marches across the globe.

One thing was clear: feminism and feminist causes are not dead or in decline in the United States.

Needed then are studies that capture the complexity of U.S. feminism. Nevertheless, They Persisted is an edited collection composed of empirical studies of the U.S. women's movement, pushing the feminist dialogue beyond literary analysis and personal reflection by using sociological and historical data.

This new collection features discussions of digital and social media, gender identity, the reinvigorated anti-rape climate, while focusing on issues of diversity, inclusion, and unacknowledged privilege in the movement.