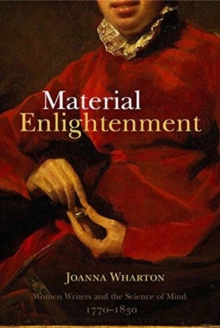 Material Enlightenment - Women Writers and the Science of Mind, 1770-1830 Hardback

Women writers played a central, but hitherto under-recognised, role in the development of the philosophy of mind and its practical outworkings in Romantic era England, Scotland and Ireland.

This book focuses on the writings and lives of five leading figures - Anna Barbauld, Honora Edgeworth, Hannah More, Elizabeth Hamilton and Maria Edgeworth - a group of women who differed profoundly in their political, religious and social views but were nevertheless associated through correspondence, family ties and a shared belief in the importance of female education.

It shows how through the philosophical language of materiality and embodiment that they developed and the 'enlightened domesticity' that they espoused they transformed educational practice and made substantial interventions into the social reformist politics of the late eighteenth and early nineteenth centuries. Alive to the manifold overlaps between emotional, and often religious, experience and experiment in the developing science of mind at this time, the book illuminates the potential and the limits of domestic Enlightenment, particularly in projects of moral and industrial 'improvement' and casts new light on a wide variety of other fields: the history of science, early psychology and religion, reformist politics and Romanticism, and how all these reflected the political and social fallout of the French Revolution in the first years of the nineteenth century. JOANNA WHARTON is an Early Career Fellow at Lichtenberg-Kolleg, the Goettingen Institute for Advanced Study in the Humanities and Social Sciences.