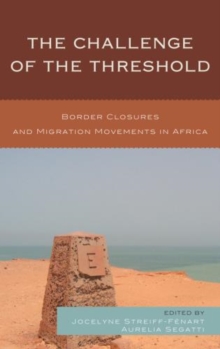 The Challenge of the Threshold : Border Closures and Migration Movements in Africa Paperback / softback

The recent containment policies aimed at regulating immigration flows towards Europe have profoundly altered the dynamics of migration in Africa.

The impact of these policies is apparent in the redefinitions of the routes, itineraries and actors of migration.

But their effect can also be felt in migrant categories and identities and in the perceptions of migrants in the societies through which they transit or the communities which they have left behind.

By placing the problem of border control at the very heart of the migration issue, the policies aimed at the restriction of migration flows have changed the meaning and significance of migration.

More than ever before, both migrants and institutions in charge of border control construe migration mostly around the challenge of border-crossing. In the Global South, the transit situation in which would-be border jumpers are retained blurs the distinction between temporary migration and settlement.

This contributes to change, in various ways, the relationship to strangers, from renewed forms of solidarities to the reactivation of latent xenophobic sentiment, whether around the Mediterranean or en route towards South Africa, the other migration hub on the continent. The editors of this volume have decided to work on the notion of "threshold" as an operative concept for addressing the multiple dimensions of the issue: the discursive and conceptual frameworks that constitute the backbone of threshold policies aiming to keep undesirables beyond borders; the constitution of stopping places, intermediate areas and relay towns, which all represent threshold spaces that challenge local urban equilibria; and the experience of liminality, in which individuals caught for a time between two states (as migrant on the road and as immigrant, the state to which they aspire), experience the typically ambiguous situations characteristic of 'threshold people' (Turner).

While ambitioning to innovate theoretically and methodologically, the volume is above all