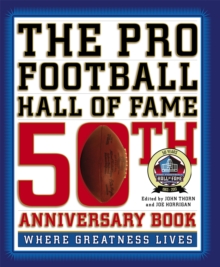 Having opened its doors in Canton, Ohio on September 7, 1963, the Hall will be celebrating its 50th anniversary year from 2012 to 2013, commencing with the Pro Football Hall of Fame Enshrinement Festival, a ten-day period in early August which culminates in the annual Hall of Fame Game.

This nationally televised contest kicks off the NFL exhibition schedule.

The Pro Football Hall of Fame Enshrinement Festival draws some 700,000 visitors annually and thus multiplies by twenty the typical crowd for induction ceremonies in Cooperstown.

Every living Hall of Famer will contribute a commentary on some aspect of the game and its history; each deceased member will be represented in a sidebar or pullout quote.

The book will be gloriously illustrated with treasures from the Hall's displayed artifacts and its archival gems, rarely if ever seen by the public.

Thorn and Joe Horrigan, the Hall's VP of Communications/Exhibits, will provide a narrative of pro football's history, perhaps via running captions, as it is celebrated at the Hall of Fame.