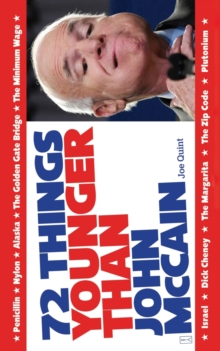 "I have the courage, the wisdom, the experience, and most importantly, the oldness necessary." -- John McCain, Saturday Night Live, May 17, 2008 John McCain may have been joking during his guest appearance on Saturday Night Live, but it is true that, if elected, at age 72 he will have more oldness on his side than any person ever inaugurated as a first-term president of the United States. 72 Things Younger Than John McCain takes a lighthearted look at all that's come into existence since John McCain was born so many, many, many years ago, including: The Jefferson Memorial Duct Tape Nachos Chocolate-Chip Cookies Area Codes Social Security Based on Joe Quint's popular blog, 72 Things Younger Than John McCain also contains humorous photos and interesting trivia that highlight the events, milestones, inventions, and people that make up American pop-culture history since McCain was born on August 29, 1936.

There's also a bonus section (albeit a very short one) of Things Older Than McCain!