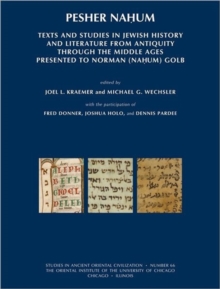 Part of the Studies in Ancient Oriental Civilization series

Contained herein are 25 articles (20 in English, 5 in Hebrew) that, like the academic oeuvre of volume's honoree, span a broad array of topics within the fields of Hebraica, Judaica, and Biblica.

The specific categories represented and the contributions they contain are: biography (Joel L.

Kraemer presents a portrait of the honoree; Walter E.

Kaegi shares personal reminiscences of Carl Herman Kraeling); text editions and translations, with analysis (Haggai Ben-Shammai analyzes and publishes a partial editio princeps of one of the early Judeao-Arabic endeavors to achieve a rapprochement between biblical and Graeco-Arab philosophy; Paul B.

Fenton analyzes and publishes the editio princeps of a newly identified esoteric epistle from the hand of David II Maimondies; Mordechai A.

Sandman analyzes and presents a critical edition of four fragments from Abraham Bar Hayya's Book of Intercalation that represent his harmonization of science and biblical exegesis; Michael G.

Wechsler presents an editio princeps of 10 newly identified fragments of Saadia Gaon's commentary on the book of Esther as well an analysis and translation of those fragments, accompanied by an inventory of all known fragments of Saadia's commentary on that book); grammar/lexicography (Joshua Blau surveys certain vocables in Classical Arabic that sometimes have a different meaning in Judaeo-Arabic), exegesis, philosophy, theology, and polemics (Elinoar Bareket surveys the factors underlying the tendency of medieval Jewish writers to identify the names of biblical people and places with contemporary equivalents; Rachel Elior examines the Jewish realm of memory surrounding the Day of Atonement; Nahem Ilan analyzes Saadia Gaon's interpretation of Proverbs 30:10-17 with a view to his anti-Karaite polemical tendency, providing as well a structural outline of Saadia's introduction to Proverbs; Eve Krakowski considers the Karaite view of the history of the biblical text and the relevance of this view to their own collective self-conception, including a critical reassessment of the view that the Karaites were influenced by certain Dead Sea Scroll texts; Abraham Lipshitz critically assesses the notion that Abraham ibn Ezra held to a Philonic view of an infinitely durative rather than completed act of creation; Meira Polliack analyzes the relationship between Yefet b.

Eli and Daniel al-Q?mis? in their exegetical approaches to biblical prophecy); history of modern scholarship (Maria Angeles Gallego presents an overview of the stages of modern European research -- beginning in the 18th century -- on medieval Judaeo-Arabic, with specific emphasis on Iberian Spanish scholarship), Jewish socio-cultural history (Moshe Gil provides a glimpse into the state of food commerce in the Geniza community from the evidence of merchants' letters; Joshua Holo considers the evidence for Gershom b.

Judah's Italian extraction and its relevance for understanding the origin of Ashkenazic Jewish culture; Benjamin Z.

Kedar evaluates the evidence for the timing of the relocation of the Tiberian Yeshiva first to Ramla and then to Jerusalem; Norman A.

Lasker surveys and assesses the history of a specific textual variation in Judah ha-Levi's Book of the Kuzari); codicological-textual history (Paul Saenger analyzes the relationship between chapter divisions of the Pentateuch in Christian -- especially Latin -- Bibles and those in Jewish tradition); Dead Sea Scrolls (Anthony J.

Tomasino critically evaluates the formation and support data for the current consensus regarding the messianic nature of 4Q246; Michael O.

Wise analyzes the content and dating of the manuscripts from Murabba'at and considers their contribution to our knowledge of various personalities both living during and involved in the First and Second Jewish Revolts); and historiography (Isaac Kalimi assesses the historiographical method of the writer of the book of Chronicles in light of both inner-canonical and extra-biblical considerations).

Also included is a comprehensive bibliography of the honoree's works as well as discrete indexes of manuscripts, biblical references, classical and medieval works, and general items.