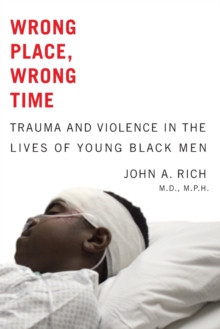 by John A. (Professor and Chair, Drexel University School of Public Health) Rich

Medical school taught John Rich how to deal with physical trauma in a big city hospital but not with the disturbing fact that young black men were daily shot, stabbed, and beaten.

This is Rich's account of his personal search to find sense in the juxtaposition of his life and theirs.

Young black men in cities are overwhelmingly the victims-and perpetrators-of violent crime in the United States.

Troubled by this tragedy-and by his medical colleagues' apparent numbness in the face of it-Rich, a black man who grew up in relative safety and comfort, reached out to many of these young crime victims to learn why they lived in a seemingly endless cycle of violence and how it affected them.

The stories they told him are unsettling-and revealing about the reality of life in American cities.

Mixing his own perspective with their seldom-heard voices, Rich relates the stories of young black men whose lives were violently disrupted-and of their struggles to heal and remain safe in an environment that both denied their trauma and blamed them for their injuries. He tells us of people such as Roy, a former drug dealer who fought to turn his life around and found himself torn between the ease of returning to the familiarity of life on the violent streets of Boston and the tenuous promise of accepting a new, less dangerous one.

Rich's poignant portrait humanizes young black men and illustrates the complexity of a situation that defies easy answers and solutions.