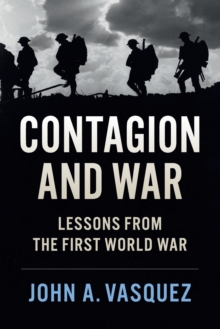 by John A. (University of Illinois, Urbana-Champaign) Vasquez

John A. Vasquez explains the processes that cause the spread of interstate war by looking at how contagion worked to bring countries into the First World War.

Analysing all the key states that declared war, the book is comprised of three parts.

Part II then analyses in detail the decision making of every state that entered the war from Austria-Hungary in 1914 to the United States and Greece in 1917.

Part III has two chapters - the first considers the neutral countries, and the second concludes the book with an overarching theoretical analysis, including major lessons of the war and new hypotheses about contagion.

This book will be of great interest to students and scholars of international relations, conflict studies and international history, especially those interested in the spread of conflict, or the First World War.