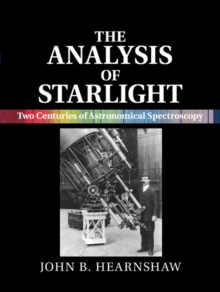 The Analysis of Starlight : Two Centuries of Astronomical Spectroscopy Hardback

by John B. (University of Canterbury, Christchurch, New Zealand) Hearnshaw

First published in 1986, this is the story of the analysis of starlight by astronomical spectroscopy.

Beginning with Joseph Fraunhofer's discovery of spectral lines in the early nineteenth century, this new edition continues the story through to the year 2000.

In addition to the key discoveries, it presents the cultural and social history of stellar astrophysics by introducing the leading astronomers and their struggles, triumphs and disagreements.

Basic concepts in spectroscopy and spectral analysis are included, so both observational and theoretical aspects are described, in a non-mathematical framework.

This new edition covers the final decades of the twentieth century, with its major advances in stellar astrophysics: the discovery of extrasolar planets, new classes of stars and the observation of the ultraviolet spectra of stars from satellites.

The in-depth coverage makes it essential reading for graduate students working in stellar spectroscopy, professional and amateur astronomers, and historians of science.