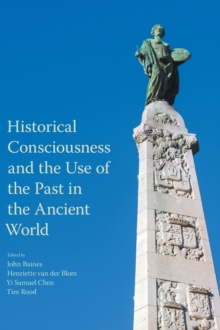 Historical Consciousness and the Use of the Past in the Ancient World offers linked essays on uses of the past in prominent and diverse cultures in ancient civilizations across the world.

This volume addresses crucial questions in current scholarship on historical consciousness and historiography.

These questions include the formation of different traditions and the manifold uses of the past in particular socio-political contexts or circumstances; the ways in which these traditions and these types of cultural memory informed or contributed to the rise of more formal modes of historiography; interactions between formal modes of historiography and other traditions of historical consciousness during their transmission; and the implications of such interactions for cultural heritage, collective memory, and later understandings of history.

The chapters discuss many questions relating to the volume's theme: theoretical and methodological approaches to ancient material; intellectual, didactic, and social circumstances and institutions; ideological motivations behind, and social functions of, interactions; conceptual, narratological, and literary processes and mechanisms such as synchronism, sequencing of events, periodization, mythological prologues, aetiological motifs, genealogical and chronological schemes, geographical and ethnographical features, temporal and stylistic devices; interchanges between different temporal frameworks such as mythical, legendary, ritual, chronological; the extent and variety of interactions such as manifestations in visual arts, monuments, cultic activities, music and dramatic performance; physical or textual channels for dissemination and transmission; stages and periods of interaction in different cultures, authors, and texts; convention and innovation; differences and relationships between scholarly and popular conceptions of history; and exchanges between local traditions and ones with a global perspective.

By taking an interdisciplinary approach, this volume situates the rise of formal modes of historiography within a larger context of the development of historical consciousness and a wider web of intercommunicating discourses.

It also uncovers intellectual processes, literary mechanisms, and social institutions involved in the construction of history.

During its construction, while many local traditions persisted, some ancients gradually went beyond the temporal and spatial limitations of their local traditions, arriving at a more extended and unified timespan, a wider geographical region, and a common origin.