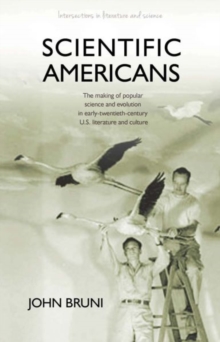 Scientific Americans : The Making of Popular Science and Evolution in Early-twentieth-century U.S. Literature and Culture Hardback

Demonstrating the timely relevance of Theodore Dreiser, Edith Wharton, Jack London and Henry Adams, this book shows how debates about evolution, identity, and a shifting world picture have uncanny parallels with the emerging global systems that shape our own lives.

Tracing these systems' take-off point in the early twentieth century through the lens of popular science journalism, John Bruni makes a valuable contribution to the study of how biopolitical control over life created boundaries among races, classes, genders and species.

Rather than accept that these writers get their scientific ideas about evolution second-hand, filtered through a social Darwinist ideology, this study argues that they actively determine what evolution means.

Furthermore, the book, examines the ecological concerns that naturalist narratives reflect - such as land and water use, waste management, and environmental pollution - previously unaddressed in a book-length study.