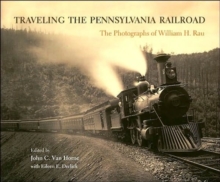 Rau, was commissioned to take more than 450 photographs along the routes of the Pennsylvania Railroad in order to promote travel on the railway to the general public.

Known as "the standard railroad of the world," the PRR was the largest rail system in the East and linked metropolitan New York and Philadelphia to Pittsburgh and such industrial cities of the Midwest as Chicago and St.

Louis. Using a mammoth view camera that made 18-inch by 22-inch glass negatives, Rau produced a spectacular series of images for the railroad's promotional use.

The remarkably detailed and texturally rich albumen prints, on deposit at The Library Company of Philadelphia, display a harmony between the railroad and the natural and industrial landscapes through which the line passed.

The collection includes striking views not just of railcars, tracks, and stations but also of cities and towns, bridges, ferry boats, rivers, canals, factories, residences, and hotels, mostly in Pennsylvania, but with some views also of New York, New Jersey, and Maryland. This oversize volume reproduces almost 100 of the photographs, carefully selected for their historical and artistic significance, as full-page quadtone images, capturing the impact of the originals as closely as possible.

The photographs are arranged in geographical order along the various branches of the PRR, and each photograph is accompanied by a descriptive caption provided by PRR expert James J.

D. Lynch, Jr. In the three essays that complement the photographs, Kenneth Finkel details Rau's career and early commercial photography, Mary Panzer places Rau and his PRR photographs in the context of the history of American landscape photography, and John R.

Stilgoe discusses the advent of railroad advertising photography and its role in shaping perceptions of the American landscape.