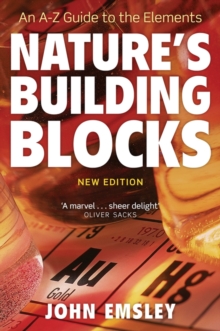 John Emsley's Nature's Building Bocks was published in paperback in 2003.

In this readable, informative, and fascinating guide to the elements are entries on each of the 100-odd chemical elements, arranged alphabetically from actinium to zirconium.

Each entry comprises an explanation of where the element's name comes from, followed by Body element (the role it plays in living things), Element of history (how and when it was discovered), Economic element(what it is used for), Environmental element (where it occurs, how much), Chemical element (facts, figures, and narrative), and Element of surprise (an amazing, little-known fact).

Since publication of the first edition there have been a number of developments.

Three new chemical elements have been named and validated: darmstadtium, roetgenium, and copernicium and the section on 'transfermium elements' has now been incorporated into the main part of the book.

Fully revised and updatedfor 2010, this browsable compendium holds a wealth of useful information.