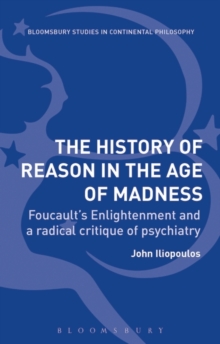 The History of Reason in the Age of Madness : Foucault's Enlightenment and a Radical Critique of Psychiatry Paperback / softback

The History of Reason in the Age of Madness revolves around three axes: the Foucauldian critical-historical method, its relationship with enlightenment critique, and the way this critique is implemented in Foucault's seminal work, History of Madness.

Foucault's exploration of the origins of psychiatry applies his own theories of power, truth and reason and draws on Kant's philosophy, shedding new light on the way we perceive the birth and development of psychiatric practice.

Following Foucault's adoption of 'limit attitude', which investigates the limits of our thinking as points of disruption and renewal of established frames of reference, this book dispels the widely accepted belief that psychiatry represents the triumph of rationalism by somehow conquering madness and turning it into an object of neutral, scientific perception.

It examines the birth of psychiatry in its full complexity: in the late eighteenth century, doctors were not simply rationalists but also alienists, philosophers of finitude who recognized madness as an experience at the limits of reason, introducing a discourse which conditioned the formation of psychiatry as a type of medical activity.

Since that event, the same type of recognition, the same anthropological confrontation with madness has persisted beneath the calm development of psychiatric rationality, undermining the supposed linearity, absolute authority and steady progress of psychiatric positivism.

Iliopoulos argues that Foucault's critique foregrounds this anthropological problematic as indispensable for psychiatry, encouraging psychiatrists to become aware of the epistemological limitations of their practice, and also to review the ethical and political issues which madness introduces into the apparent neutrality of current psychiatric discourse.