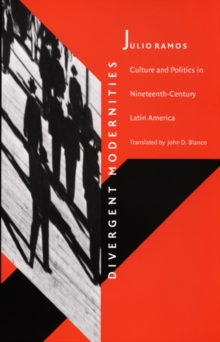 With a Foreword by Jose David SaldivarSince its first publication in Spanish nearly a decade ago, Julio Ramos's Desenucuentros de la modernidad en America Latina por el siglo XIX has been recognized as one of the most important studies of modernity in the western hemisphere.

Available for the first time in English-and now published with new material-Ramos's study not only offers an analysis of the complex relationships between history, literature, and nation-building in the modern Latin American context but also takes crucial steps toward the development of a truly comparative inter-American cultural criticism. With his focus on the nineteenth century, Ramos begins his genealogy of an emerging Latin Americanism with an examination of Argentinean Domingo Sarmiento and Chilean Andres Bello, representing the "enlightened letrados" of tradition.

In contrast to these "lettered men," he turns to Cuban journalist, revolutionary, and poet Jose Marti, who, Ramos suggests, inaugurated a new kind of intellectual subject for the Americas.

Though tracing Latin American modernity in general, it is the analysis of Marti-particularly his work in the United States-that becomes the focal point of Ramos's study.

Marti's confrontation with the unequal modernization of the New World, the dependent status of Latin America, and the contrast between Latin America's culture of elites and the northern mass culture of commodification are, for Ramos, key elements in understanding the complex Latin American experience of modernity.

Including two new chapters written for this edition, as well as translations of three of Marti's most important works, Divergent Modernities will be indispensable for anyone seeking to understand development and modernity across the Americas.