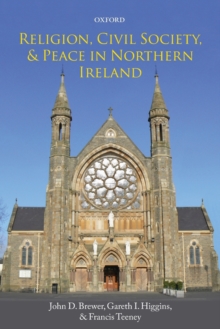 Religion was thought to be part of the problem in Ireland and incapable of turning itself into part of the solution.

Many commentators deny the churches a role in Northern Ireland's peace process or belittle it, focusing on the few well-known events of church involvement and the small number of high profile religious peacebuilders.

This new study seeks to correct various misapprehensions about the role of the churches by pointing to their major achievements in boththe social and political dimensions of the peace process, by small-scale, lesser-known religious peacebuilders as well as major players.

The churches are not treated lightly or sentimentally and major weaknesses in their contribution are highlighted.

The study challenges the view that ecumenism wasthe main religious driver of the peace process, focusing instead on the role of evangelicals, it warns against romanticising civil society, pointing to its regressive aspects and counter-productive activities, and queries the relevance of the idea of 'spiritual capital' to understanding the role of the churches in post-conflict reconstruction, which the churches largely ignore.

This book is written by three 'insiders' to church peacebuilding in Northern Ireland, who bring their insight and expertise as sociologists to bear in their analysis of four-years in-depth interviewing with a wide cross section of people involved in the peace process, including church leaders and rank-and-file, members of political parties, prime ministers, paramilitary organisations, community development and civil society groups, as well as government politicians and advisors.

Many of theseare speaking for the first time about the role of religious peacebuilding in Northern Ireland, and doing so with remarkable candour.

The volume allows the Northern Irish case study to speak to other conflicts where religion is thought to be problematic by developing a conceptual framework tounderstand religious peacebuilding.