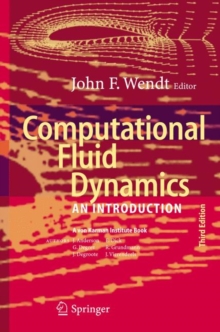 Computational Fluid Dynamics: An Introduction grew out of a von Karman Institute (VKI) Lecture Series by the same title ?rst presented in 1985 and repeated with modi?cations every year since that time.

The objective, then and now, was to present the subject of computational ?uid dynamics (CFD) to an audience unfamiliar with all but the most basic numerical techniques and to do so in such a way that the practical application of CFD would become clear to everyone.

A second edition appeared in 1995 with updates to all the chapters and when that printing came to an end, the publisher requested that the editor and authors consider the preparation of a third edition.

Happily, the authors received the request with enthusiasm.

The third edition has the goal of presenting additional updates and clari?cations while preserving the introductory nature of the material.

The book is divided into three parts. John Anderson lays out the subject in Part I by ?rst describing the governing equations of ?uid dynamics, concentrating on their mathematical properties which contain the keys to the choice of the numerical approach.

Methods of discretizing the equations are discussed and transformation techniques and grids are presented.

Two examples of numerical methods close out this part of the book: source and vortex panel methods and the explicit method.