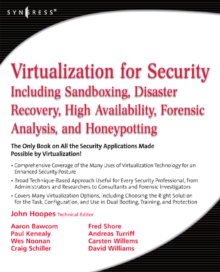 One of the biggest buzzwords in the IT industry for the past few years, virtualization has matured into a practical requirement for many best-practice business scenarios, becoming an invaluable tool for security professionals at companies of every size.

In addition to saving time and other resources, virtualization affords unprecedented means for intrusion and malware detection, prevention, recovery, and analysis.

Taking a practical approach in a growing market underserved by books, this hands-on title is the first to combine in one place the most important and sought-after uses of virtualization for enhanced security, including sandboxing, disaster recovery and high availability, forensic analysis, and honeypotting. Already gaining buzz and traction in actual usage at an impressive rate, Gartner research indicates that virtualization will be the most significant trend in IT infrastructure and operations over the next four years.

A recent report by IT research firm IDC predicts the virtualization services market will grow from $5.5 billion in 2006 to $11.7 billion in 2011.

With this growth in adoption, becoming increasingly common even for small and midsize businesses, security is becoming a much more serious concern, both in terms of how to secure virtualization and how virtualization can serve critical security objectives.

Titles exist and are on the way to fill the need for securing virtualization, but security professionals do not yet have a book outlining the many security applications of virtualization that will become increasingly important in their job requirements.

This book is the first to fill that need, covering tactics such as isolating a virtual environment on the desktop for application testing, creating virtualized storage solutions for immediate disaster recovery and high availability across a network, migrating physical systems to virtual systems for analysis, and creating complete virtual systems to entice hackers and expose potential threats to actual production systems. About the TechnologiesA sandbox is an isolated environment created to run and test applications that might be a security risk.

Recovering a compromised system is as easy as restarting the virtual machine to revert to the point before failure.

While traditional disaster recovery methods require time-consuming reinstallation of the operating system and applications before restoring data, backing up to a virtual machine makes the recovery process much easier, faster, and efficient.

The virtual machine can be restored to same physical machine or an entirely different machine if the original machine has experienced irreparable hardware failure.

Decreased downtime translates into higher availability of the system and increased productivity in the enterprise. Virtualization has been used for years in the field of forensic analysis, but new tools, techniques, and automation capabilities are making it an increasingly important tool.

By means of virtualization, an investigator can create an exact working copy of a physical computer on another machine, including hidden or encrypted partitions, without altering any data, allowing complete access for analysis.

The investigator can also take a live ?snapshot? to review or freeze the target computer at any point in time, before an attacker has a chance to cover his tracks or inflict further damage. A honeypot is a system that looks and acts like a production environment but is actually a monitored trap, deployed in a network with enough interesting data to attract hackers, but created to log their activity and keep them from causing damage to the actual production environment.

A honeypot exposes new threats, tools, and techniques used by hackers before they can attack the real systems, which security managers patch based on the information gathered.

Before virtualization became mainstream, setting up a machine or a whole network (a honeynet) for research purposes only was prohibitive in both cost and time management.

Virtualization makes this technique more viable as a realistic approach for companies large and small. 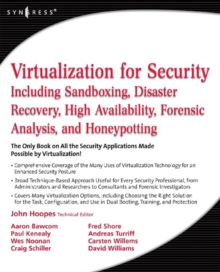