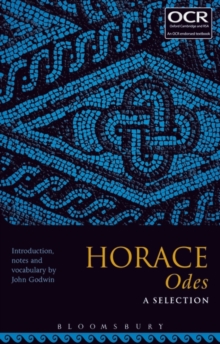 This is the endorsed publication from OCR and Bloomsbury for the Latin A-Level (Group 4) prescription of Horace's Odes, giving full Latin text, commentary and vocabulary for Odes 3.2, 3.3, 3.4, 3.6.

A detailed introduction covers the prescribed text to be read in English, placing the poems in their Roman literary context. Horace was the finest lyric poet in Latin and these four of the six 'Roman Odes', written in the early years of the rule of the first Roman emperor Augustus, show his poetic power at full stretch.

They discuss issues of political and moral concern for the regime and its citizens with the clarity of a deeply personal and unique voice, making clever use of mythology and literary allusion and coining some of the most resonant phrases in the Latin language. Resources are available on the Companion Website www.bloomsbury.com/ocr-editions-2019-2021