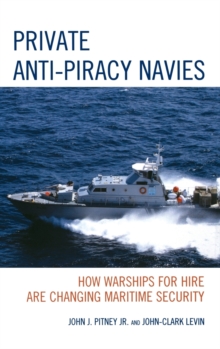 The twenty-first century has seen a sharp rise in privatization of the military, especially of logistics and security functions during the U.S.-led wars in Iraq and Afghanistan.

The outbreak of Somali piracy that started in 2008 has prompted a similar revolution in maritime security.

Private Anti-Piracy Navies is intended to provide a contextualized understanding of the historical origins, current state, and future prospects of this fast-changing sector.

Centuries ago, the British East India Company used a private navy against piracy in the same waters with much success.

Yet since then, international law has evolved to more tightly regulate the use of force by civilians, and to afford greater protections to suspected pirates.

Thus, the development of what are in effect private warships has presented numerous legal and regulatory problems.

How can the companies that operate these vessels be effectively licensed?

Under what circumstances should they be allowed to use lethal force?

This book explains how regulators in industry and government have attempted to answer such questions, and highlights the remaining areas of uncertainty.

It also addresses the economic factors that drive the struggle between pirates and anti-piracy forces.

Of equal concern are operational considerations such as defensive tactics, logistics, and rules of engagement.

Partly due to the contribution of private security, piracy in the Indian Ocean has dropped significantly over the past two years, leading to widespread overconfidence.

Governments under severe budget pressure may withdraw their naval task forces from the region prematurely, leading to a resurgence of Somali piracy.

At the same time, pirates are wreaking havoc in the Gulf of Guinea off West Africa.

The book concludes with an assessment of private naval forces' prospects in these conflicts over the short term, as well as the implications for wider naval privatization in the long run.