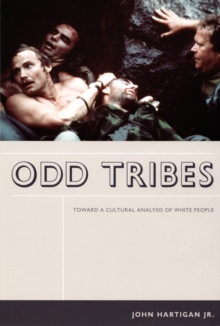 Odd Tribes : Toward a Cultural Analysis of White People Hardback

Considering the relation of phantasmatic cultural forms such as the racial stereotype "white trash" to the actual social conditions of poor whites, John Hartigan Jr. generates new insights into the ways that race, class, and gender are fundamentally interconnected.

By tracing the historical interplay of stereotypes, popular cultural representations, and the social sciences' objectifications of poverty, Hartigan demonstrates how constructions of whiteness continually depend on the vigilant maintenance of class and gender decorums. Odd Tribes engages debates in history, anthropology, sociology, and cultural studies over how race matters.

Hartigan tracks the spread of "white trash" from an epithet used only in the South prior to the Civil War to one invoked throughout the country by the early twentieth century.

He also recounts how the cultural figure of "white trash" influenced academic and popular writings on the urban poor from the 1880s through the 1990s.

Hartigan's critical reading of the historical uses of degrading images of poor whites to ratify lines of color in this country culminates in an analysis of how contemporary performers such as Eminem and Roseanne Barr challenge stereotypical representations of "white trash" by claiming the identity as their own.

Odd Tribes presents a compelling vision of what cultural studies can be when diverse research methodologies and conceptual frameworks are brought to bear on pressing social issues.