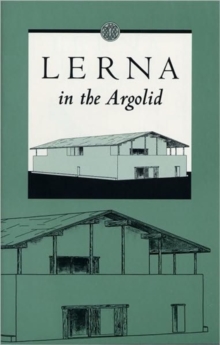 Lerna in the Argolid Paperback / softback

Situated on the shores of the Argolic Gulf, only a few miles away from the much later prehistoric sites of Mycenae, Tiryns, and Midea, Lerna is one of the key building blocks in our understanding of Greek archaeology.

The first evidence from the site is Neolithic, and the latest settlement evidence is Mycenaean.

However, the most important material from the site comes from the middle of the 3rd millennium B.C. when a remarkable large, rectangular building known as The House of the Tiles was built.

Possibly never finished, with unpainted walls and doors that lead nowhere, the purpose and meaning of this building has provoked vigorous debate.

Was it the house of a chief and the precursor of the later Mycenaean palaces? Or was it a communal storage facility, designed to store the elaborately sealed chests and jars found inside?

No less mysterious than its use is its destruction: After a violent fire, a huge mound was built on top of the charred foundations, the area avoided by later house builders.

This guide is illustrated with many plans and black and white photos.