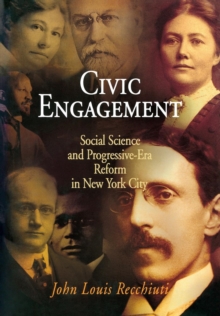 John Recchiuti recounts the history of a vibrant network of young American scholars and social activists who helped transform a city and a nation.

New York, in the late Gilded Age and Progressive Era, was the nation's financial capital, its principal hub for immigration, and its premier center for the arts.

It was also a center of civic engagement: most of the nation's main reform organizations were headquartered there.

As public intellectuals, members of the city's social science network championed the fight for civil rights through the NAACP and National Urban League; sought solutions to labor problems through the American Association for Labor Legislation, National Consumers' League, and National Child Labor Committee; founded the nation's first settlement houses; and established the first center for social science and social work, the New York School of Philanthropy. In New York, which one group of social scientists called "the greatest social science laboratory in the world," these men and women lived and worked in Greenwich Village's working-class haunts, amid immigrant poverty on the Lower East Side, and on Columbia University's Upper West Side campus.

They debated how much government should regulate laissez-faire capitalism, whether poverty was caused by individual character flaws, and how, through the New York Bureau of Municipal Research, to thwart municipal corruption.

Some promulgated a racist eugenics, while others fought racism in the name of social science. And, in their reach for leadership, they confronted an essential question: was social science to be the herald of a reinvigorated democracy, or an instrument of technocracy?In this deeply researched study, Recchiuti focuses on more than a score of Progressive reformers, including Florence Kelley, W.

He reminds us how people from markedly diverse backgrounds forged a movement to change a city and, beyond it, a nation.