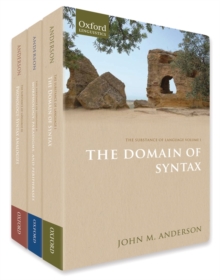 The Substance of LanguageVolume I: The Domain of SyntaxVolume II: Morphology, Paradigms, and PeriphrasesVolume III: Phonology-Syntax AnalogiesJohn M. AndersonThe three volumes of The Substance of Language collectively overhaul linguistic theory from phonology to semantics and syntax to pragmatics and offer a full account of how the form/function relationship works in language.

Each explores the consequences for the investigation of language of a conviction that all aspects of linguistic structure are grounded in the non-linguistic mental faculties on which language imposes its own structure.

The first and third look at how syntax andphonology are fed by a lexical component that includes morphology and which unites representations in the two planes.

The second examines the way morphology is embedded in the lexicon as part of the expression of the lexicon-internal relationships of words.

The Domain of Syntax explores the consequences for syntax of assuming that language is grounded in cognition and perception.

It shows that syntax is characterized by a set of categories based on distinctions in what the categories are perceived to represent.

The first part of the book traces the twentieth-century development of anti-notionalism, culminating in the assumption that syntax is autonomous.

The author then looks at syntactic phenomena, many involving the fundamental notionof finiteness.

He considers whether the appeal to grounding permits a lexicalist approach that would allow syntax to dispense not only with structural mutations such as category-change and 'empty categories' but with universal grammar itself. Morphology , Paradigms, and Periphrases is concerned with the role of the lexicon, in particular its inflectional morphology, in mediating between the substantively different categories of syntax and phonology.

In the first part of the book Professor Anderson looks at the central role of the paradigm in reconciling the demands of syntactic categorization with the available means of expression.

He examines the expressive role of inflection, illustrating his argument with Old Englishverb morphology.

In the second part of the book the author pursues the notion of grammatical periphrasis.

He starts out from its role as a solver of the problem of defective or incomplete paradigms and then compares it with other analytic expressions.

He concludes with a discussion of why studies of grammaticalperiphrasis have focused on verbal constructions.

He looks at the mechanism by which grammatical periphrases compensate for gaps in the finite verb paradigm and what this reveals about the substantive differences between verbs and nouns. Phonology-Syntax Analogies looks at the substantive and structural analogies betwem phonology and syntax and the factors that cause such analogies to break down.

It considers the degree to which analogies between syntax and phonology result from their both being representational subsystems within the overall system of language.

At the same time it examines how far semantic and phonetic properties limit such analogies.

The book presents a powerful argument against the notion of anungrounded autonomous syntax, which it sustains and supports by detailed grammatical analyses and a powerfully coherent conceptual understanding of the nature of language. The many detailed proposals of John Anderson's fine trilogy are derived from an over-arching conception of the nature of linguistic knowledge that is in turn based on the grounding of syntax in semantics and the grounding of phonology in phonetics, both convincingly subsumed under the notion of cognitive salience.

The Substance of Language is a major contribution to linguistic theory and the history of linguistic thought.